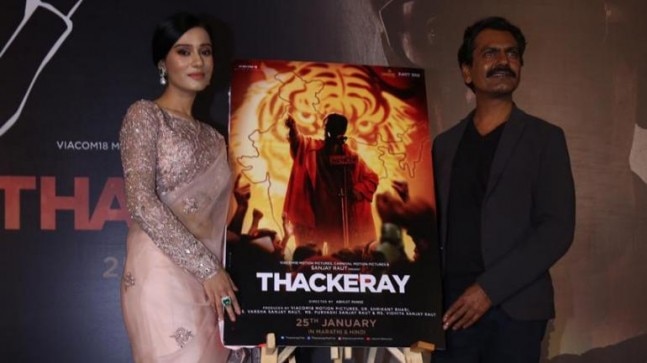 Upcoming Marathi Movie Thackeray Trailer out now and trailer cross 7M in 1day on YouTube Hindi and Marathi.This Movie is a Biopic of Balasaheb Thackeray Marathi politician.There is a lot about Balasaheb’s theme in Thackeray’s film. It will be seen in the film with the Marathi people.Balasaheb help Marathi peoples for rights.

Balasaheb Thackeray was an Indian politician from Maharashtra who founded Shiv-Sena.Born in Pune on 23 Jan 1926 and Died in 17 Nov 2012.Bal Thackeray is an popular Marathi politician Fight For Marathi Peoples.In the film ‘Thackeray’, also Nawazuddin Siddiqui will be seen in the lead role of Hinduhrudaysamrat Balasaheb Thackeray and actress Amrita Rao Maasaheb Meenatai Thackeray. The film is directed by Abhijeet Panse and will be released on January 25, 2019, all over the world in Hindi and Marathi.

Thackeray is a political movie which is coming out with Sanjay Raut. In this film, everything is shown on Bal Thackeray’s subject. His dialogs and some decisions taken by him will be seen in this film. The Thackeray film has full political carrier of Bal Thackeray.

In the film “Thackeray”, you see Nawazuddin Siddiqui as Bal Thackeray while Amrita Rao plays Bal Thackeray’s wife. Thackeray is directed by Abhijeet Panse, while the viacom 18 cornival motion and sanjay raut have been presented.

Thackeray Movie Trailer get big response from Audience people likes story characters music and the main character bal Thackeray.2018 is good for Marathi movies lots of movie get good response as well as get big box office collection and now Thackeray movie get good response from audience and the box office collections of Thackeray movie more than 10cr in week its good for Marathi movies.

Zombivli marathi movieZombivli movie is based on horror-comedy zombies movie like hollywood movies this is 1st marathi movie based on zombies. Film Credits: Directed By:...
Read more
Movies

Your password reset link appears to be invalid or expired.